When cloning a structure in Sparx Enterprise Architect (EA) as a new version, that contains at least one diagram, every newly created diagram (clone) gets quickly opened and closed again during cloning process. In EA v14.1 build 1429 the EA_OnPostOpenDiagram events can be caught successfully however the EA_OnPostCloseDiagram are not thrown by EA in this case. I figured this out […]

A quick one: last Friday, Sparx released an update to its Enterprise Architect v14.0. When I installed it today I noticed that all of a sudden I could no longer use the Deployment Connector to connect an Artifact with an Execution Environment. However, the same morning it still worked. The error message I now get is: The requested connection is […] 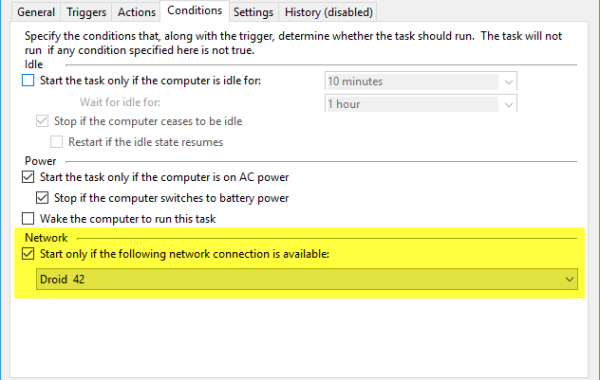 There is a bug in Task Scheduler of Windows 10. If the network condition of a Scheduled Task gets enabled and a specific network connection gets selected, the corresponding Scheduled […]

Recently I ran into a strange error when working on an ODataController. On several occasions (especially on CREATE or UPDATE operations) we do not want to return the actual underlying entity of the controller, but instead would like to return an entity that can be used for synchronisation such as a Job. So instead of doing something like this and […]

Import-CliXml is a rather convenient way to import (configuration) data from serialized XML files which then can be easily processed as hashtables. But unfortunately, there seem to be some subtle […]

Microsoft PowerShell module manifests allow you to define scripts that are run prior to actual loading of the module itself. These scripts run in the caller’s scope (and not in the module’s scope) and can be defined by stating them in the ‘ScriptsToProcess’ attribute of the manifest. However, each of these scripts will appear as if they have been loaded […]

[Bug] PowerShell HelpUri and inline help not working as expected

[UPDATE 2014-12-01] An update to this issue. It seem that this only appears PowerShell v3 and not in PowerShell v4 any more. When we create our Cmdlets we often supply a link to an Internet resource where we can put updated or more extensive help information. We normally do this in addition to providing some inline help in the Cmdlets. […]

Recently I observed a strange behavior when working with an ODATA service via a “System.Data.Services.Client.DataServiceContext” that was wrapped inside a class library (via a regular “Service Reference”). The specific ODATA service in question was an Entity Framework v4.1 based service and had defined two different entity sets (“Objects” and “Tasks”) along with its regular CRUD operations. The specialty of the […]

[UPDATE 2014-10-21] the code and the assembly are now available under Apache 2.0 license on GitHub at https://github.com/dfch/biz.dfch.CS.System.Utilities [UPDATE 2014-12-10] see below for further details on this issue and a workaround to this that does not need PSRemoting Recently I observed a strange bug that occured when trying to invoke a PowerShell job via the Windows Task Scheduler. In my […]

WebAPI and “The response to this POST request did not contain a ‘location’ header. That is not supported by this client.”

I just came across another nuisance in .NET WebAPI that I want to share with you quickly. In one of our LightSwitch projects we use WebAPI ODATA controller to help out when LightSwitch internal capabilities come to their end. As we are using a PowerShell once in a while as you might already have guessed from our web site we […]

[UPDATE] 2014-11-28 Jerther sent me a comment (see below) on how he solved this issue! So how did he do it? The short answer is, that you have to include special registration code inside the ‘Application_Start()’ and other places where the order on how you code it plays a crucial role. Check out his post ASP.Net: Web API 2 + […]

When you install vCAC 5.2 Hotfix 5 you certainly have to install this on all componentens and systems running any piece of vCAC software. However, there is a scenario when this is not enough, or you have to do some manual adjustments. You will remember, that when you first installed vCAC 5.2, you had to ‘install’ the ‘Model Manager Data’ […]

[UPDATE 2014-08-11] See note below for a workaround on this. vCAC provides access to its data model via an ODATA REST interface that is based on the Microsoft .NET Entity Framework. Access to this interface is encapsulated and abstracted via the EF DataService that is exposed via the ModelManagerEntities object. For more information you can check some of my earlier […]

Static IP Assignment not working any more after you apply vCAC 5.2 Hotfix 4 (HF4)

When using the static IP service in vCAC 5.2 you might come to a suprise after you installed vCAC 5.2 Hotfix 4 (HF4), because – it no longer works… VMware Support is informed about this and will fix it in HF5. Until then you either do not use this feature any more or use a workaround to “manually” assign the […]