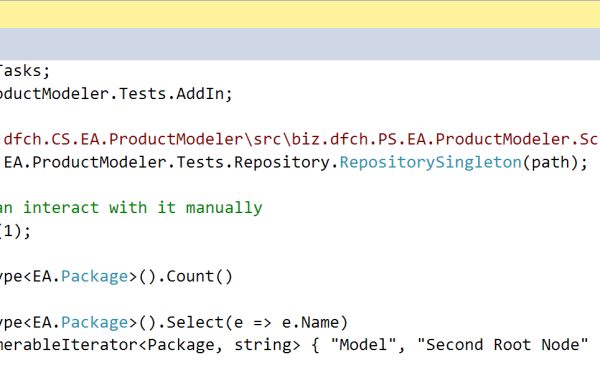 Developing an AddIn for Sparx Enterprise Architect is tedious, even with the existence of support such as the great work of Geert Bellekens. However, since Visual Studio 2015 we can […]

Before starting development we first had to set up a new WPF project. The projects target framework is .NET Framework 4.6.2 and we used Microsoft Visual Studio Community 2015 as […]

As I was working on a project, I had to check if we can use Log4Net for an UWP Application which will run on a Windows 10 IoT device. For setting up the UWP Application, I used Visual Studio 2015 Community Edition. In the new project dialog I chose Blank App (Universal Windows) and used the following settings. Minimum Version: […]

If you are using LocalDB and want to create an empty database you should perform the following steps. Go to Visual Studio Server Explorer | Data Connections Select Add Connection from the context menu Change Data Source to Microsoft SQL Server Database File (i.e. LocalDB) Set the Database file name by entering a database name and path that corresponds to […]

You might have heard of the recently added support for PowerShell development inside Visual Studio. This extension provides several features, with support for the Pester testing framework being one of them. However, it seems that sometimes the Visual Studio 2013 just does not recognise your test scripts (even when they are named like SomeScript.Tests.ps1). As a quick workaround you can […]

Today I was playing with TFS Power Tools to check in some PowerShell scripts where I ran into a strange error. Obviously I wanted to use the PowerShell Cmdlets for that you can select via the ‘Custom’ option in the ‘Power Tools’ installer … For a quick intro on TFS via PowerShell you can have a look at PowerShell and […]