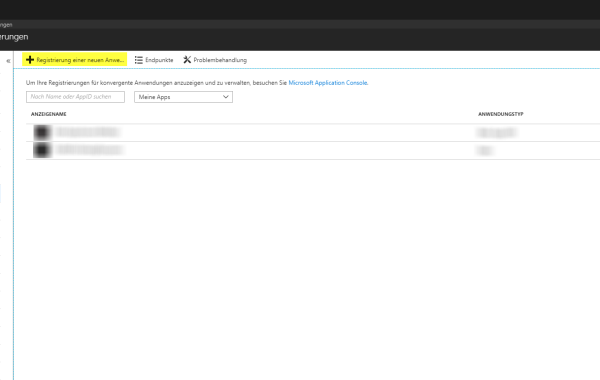 After playing around with the Office 365/Exchange 2016 REST API I decided to summarize the knowledge and the experiences I gained in this blog post. The goal of the tryout […]

This blog post is a bit more lengthly than my usual posts and the idea came from an issue I faced when working in one of our project where we use an OData v3 REST interface that talks to an MS SQL Server (2012 R2) via EntityFramework v6.1.3. In short: we wanted to implement ‘entity framework row level security’ (in […]

Some time ago I mentioned an error and a possible workaround when using PowerShell with the Clickatell SOAP interface. As Clickatell now provides a REST based interface I thought it is time to quickly show you how to use this API instead. Description When sending SMS you certainly first have to enable the REST API in your developer central account. […]

Graylog2 comes with a very limited alerting feature where you can basically only create alerts based on a single field. However, and thus far I can follow the motivation of […]

LightSwitch can consume ODATA data source that you can use to gain more flexibility than using the internal data sources that also generate ODATA REST endpoints. Microsoft Web API provides an easy way on how to generate these endpoints. In this post I quickly describe the steps you need to take to actually create an endpoint that is actually usable […]

I updated the biz.dfch.PS.Storebox.Api for being able to have file transfers to and from Ctera (Storebox) via its REST API. There you will also find the link to the NuGet package and the Github repository. With it you can get a directory listing, download and upload a file. It uses our logging module as well as the generic ‘Invoke-CteraRestCommand’. There […]

Here are some code fragments that might help when dealing with CTERA REST responses. For a complete PowerShell module check this post Module: biz.dfch.PS.Storebox.Api. 1. Selecting an Attribute value based on its ‘id’: 2. Converting a list ov ‘val’ into an array 3. Loading XML template from ‘defaults’ and populate them:

Using PowerCLI for fun and profit in general is a great thing to do – in general… However, in certain cases PowerCLIs implementation is much slower than using the underlying REST calls directly. This is especially true when using Get-CiVm to get information about a vCloud Director (vCD) virtual machine. Consider the following fragment: This is all pretty fast, as […]

With PowerCLI’s ConnectCI-Server CmdLet it is pretty easy to login to a vCD host. And for most of the time the supplied CmdLets are sufficient enough to solve the problems we deal with it daily. However, sometimes we would like to make specific REST calls to vCD directly (for example when the Searc-Cloud CmdLet is not doing what we want). […]

[UPDATE 2014-11-16] The module is now available on NuGet. See below for download link. [UPDATE 2014-10-13] I split the module into separate PS1 files (one per cmdlet/function) and created a manifest for it. Now you can use a prefix and change the name of the cmdlets (the default prefix is ‘Ctera’). Here you find the PowerShell module that you can […]